Title Research: Thriller (Get Out)

I decided to focus a bit more on the thriller genre considering I am creating a thriller related opening sequence, so I found another thriller-based film: Get Out. The opening sequence to Get Out had an overall eerie connotation and feeling. About 27 titles were present during the sequence, all appeared through a fade in and disappeared from the scene through a simple fade out. Majority of the opening was a very long-timed shot of forest and woods. To ensure its appeal to the audience a country-folk like score was used in the beginning of the sequence's background, creating a sort of contradicting mood. The score the switches to a song and the forest shot switches to still images of photos that have been taking by the main character, who is revealed to be a photographer soon after.

Silent Hill, a horror and thriller-based film, has by far the most intriguing opening I've seen so far. A total of 25 titles were present in the opening sequence. The sequence held a sad, yet terrifying mood. Although I found the song choice to be a bit odd, it didn't stop me be from being interesting in the film, in fact it helped pull me in even more. Images of the characters in the film were the showed alongside titles. The title's font played a role in the sequences appeal. The genre was reinforced through the dark lighting and creatures present in the opening sequence. The editing technique of the opening was amazing as well, although the movie is live action, I thought it was interesting how it had an animated like opening instead.
Posted by Shenica at 7:09 AM No comments:

Code 8 has a quick paced opening sequence. A total of 33 titles were in its opening sequence. It felt as if a very complexed story was being told throughout the sequence. In the background were voiceovers and incidental music, which created an extremely intense and rushed atmosphere. Images of people working, and newspaper headlines and articles were prioritized in the opening sequence. They played a key role in piecing together the sci-fi aspect of the film. Titles would fade in, then suddenly glitch out and disappear. I found that to also play a role in reinforcing the film's genre. Technology was used very much effectively through the use of editing techniques and sounds.

Posted by Shenica at 7:09 AM No comments: 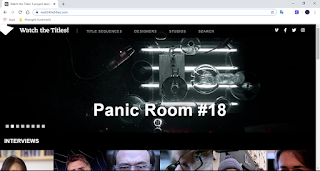 I wanted to expand my knowledge on titles, so I decided to further my research. Another site I decided to use for my titling research is Watch the Titles. This site was helpful in many ways. From the start, everything was clear and simple to understand. I got to view certified published works of other students, which was amazing I might add. I watched a couple more opening sequences of films and they were all helpful. I learned a few new ways to display titles. I also learned that transitions such as fade in/outs were very common.

Posted by Shenica at 7:40 AM No comments:

Art of the title 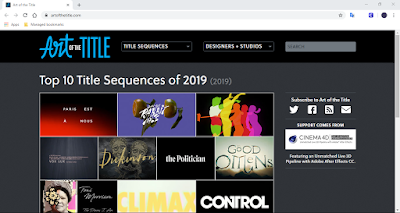 Today I began my research on titles. As I searched the web, I stumbled upon this site: Art of the Title. Right from the introduction page, I grew amazed. This site features a ton of movie, TV show, and even documentary openings. It was extremely helpful. I was able to see the creative ways titles were used. There's an option to view the titles of many films, so I watched a couple. A few things I learned from this site would have to be not all titles use the same font. I also learned a few creative  locations for title placements.

During the beginning of the school year, I was assigned a genre to research: drama. I worked in a group to deconstruct the elements of the genre. In the presentation above, you're able to see what we'd found. Drama is such a broad and popular genre. We researched the common camera angles, shots, and movement used to differentiate the genre from other genres such as action, romance, horror, and thriller etc. Further into the presentation, we switched our focus to the mis en scene and sounds of drama. We even provided a couple of film examples. Towards the end of the presentation we were able to add in our own personal thoughts on the genre's elements. An element that appealed to me in the genre would have to be the use of sounds. Personally, I love how in drama films, viewers are able to feel a character’s emotion through its soundtrack.

Posted by Shenica at 9:22 AM No comments: